Where exactly did William Jefferson Galloway, Sr. and family live in 1918?

The reason I am curious is because I have two separate documents from 1918 and one of them has an additional clue as to where they might have actually lived. The two documents in question are the WWI draft registration card for William Jefferson Galloway, Sr. and a birth certificate for his daughter, Annie Rooney Galloway.

(The day before Annie Rooney was born)

Their household consisted of W.J. and his wife, Rooney Delilah (Hicks) Galloway, along with 6 children.

Names and ages of the family at the time of Annie Rooney’s birth:

Let us now take a look at the two documents.

On Annie Rooney’s birth certificate, she is listed as being born at 224, Wheelock, Robertson, Texas. Note: I have no idea what the circled “224” means. Is it an address of the physician? Furthur down in the document asks the question to each parent their “residence” and the answer is “near Macy”. That would Be Macey, across the county line in Brazos and approximately 11 miles east.

Below is the original birth certificate. 1 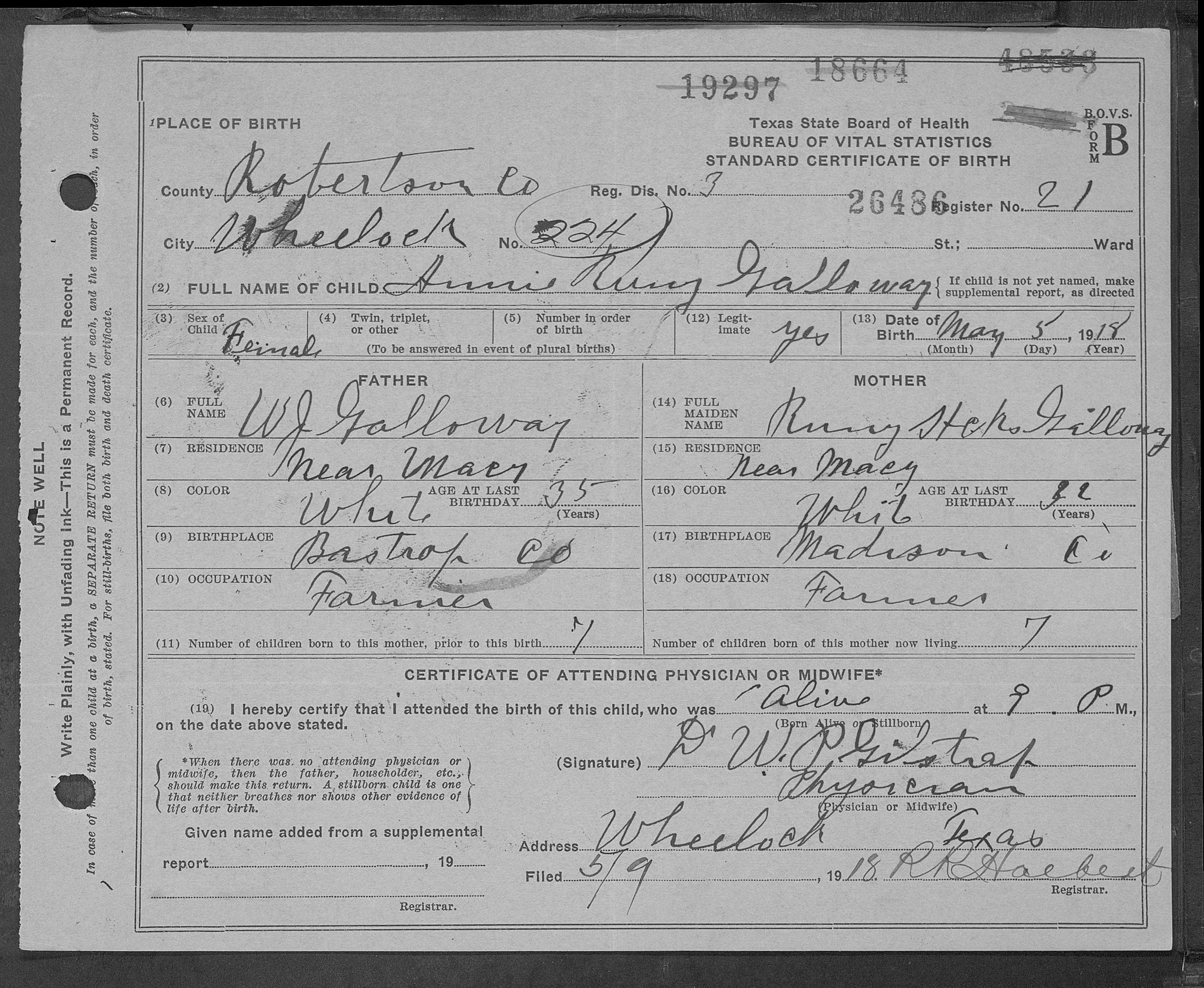 On the WWI draft registration card his permanent home address is listed as R1 [Route 1] Wheelock Robertson T[exas]. Which is in south central Robertson County, Texas. To enlist in the draft he had to go to the county seat which is in Franklin, approximately 11 miles north. According to the date on the registration card, he did this on Thursday, 12 September 1918.

Below are the original draft card 2 and a blank one that I transcibed onto. 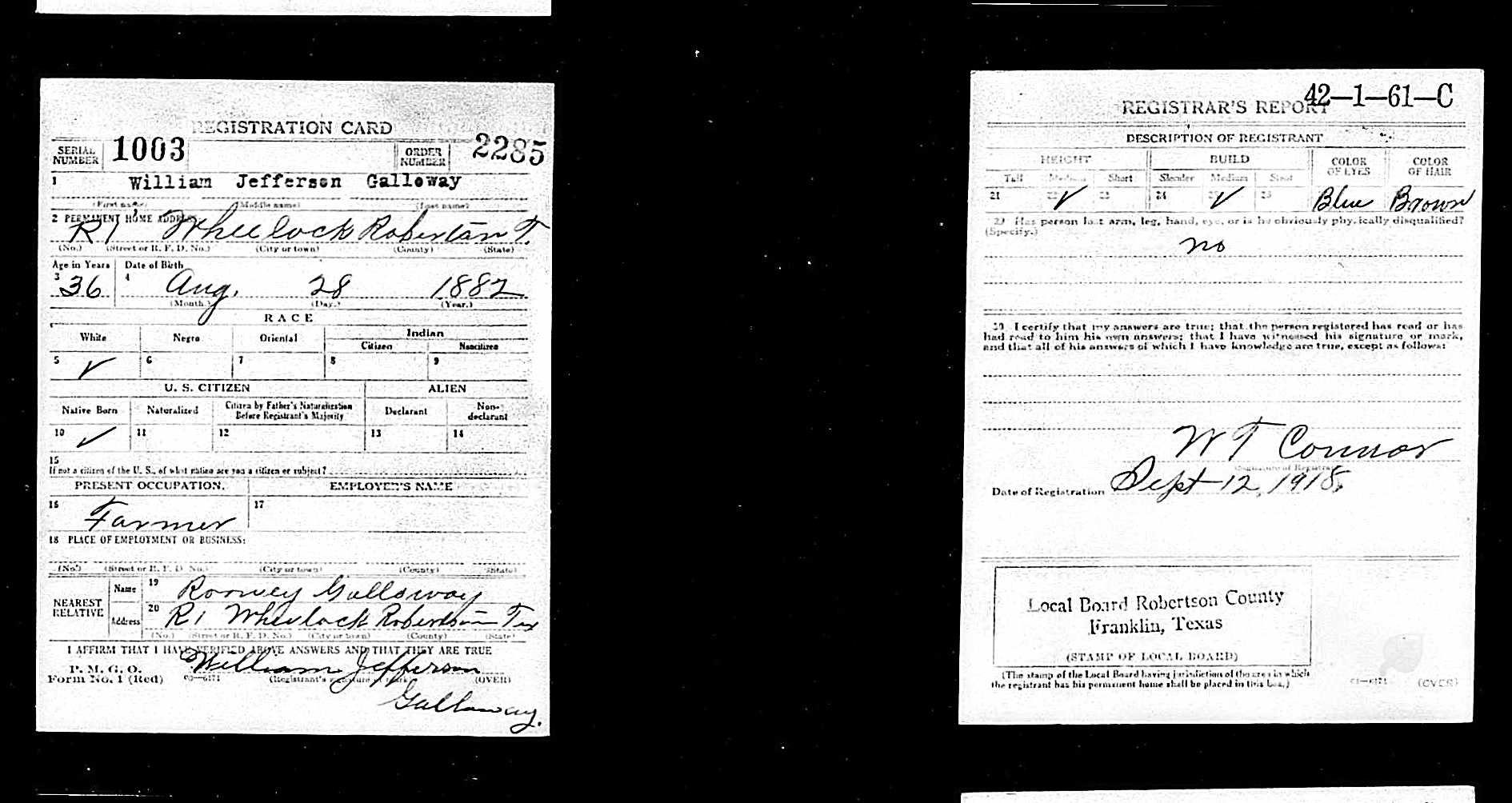 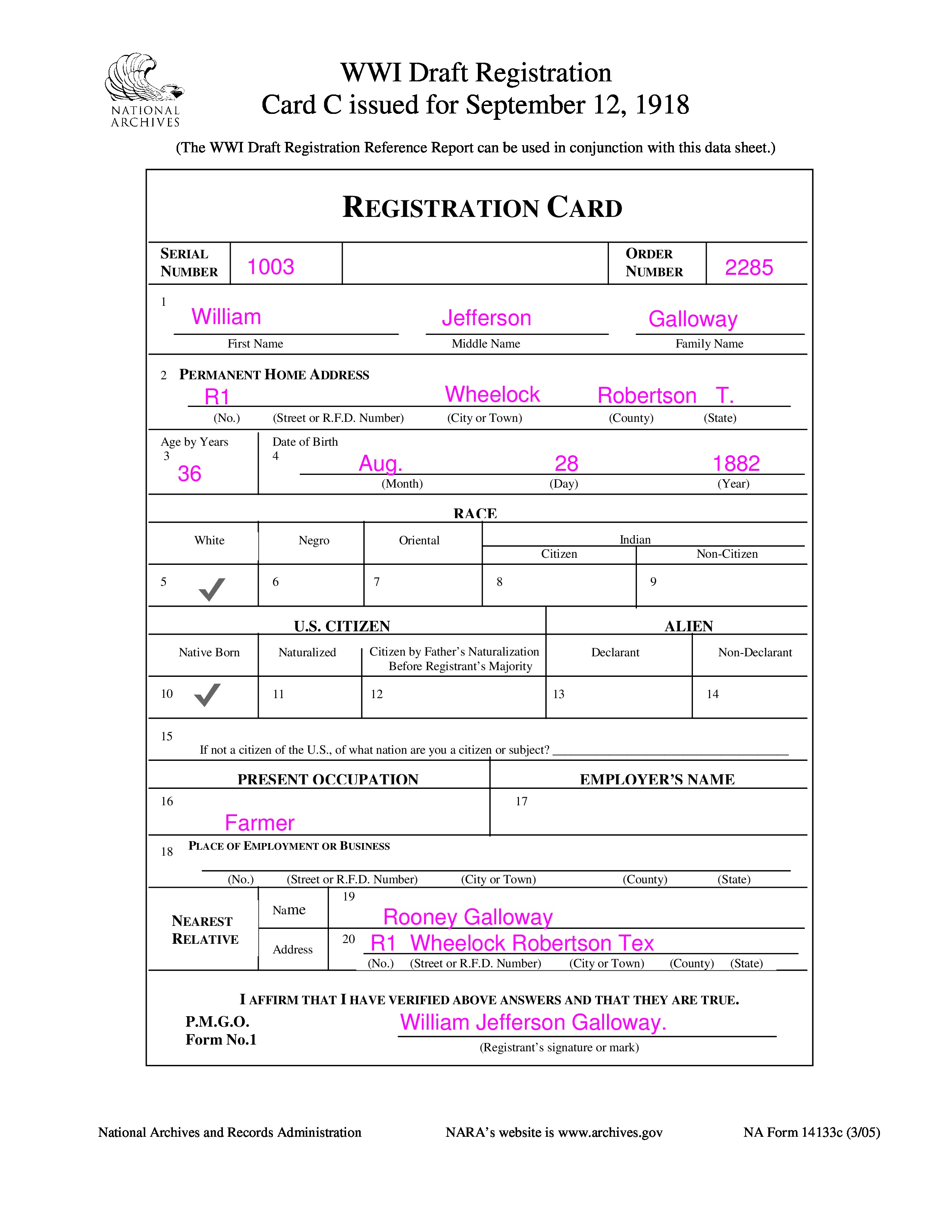 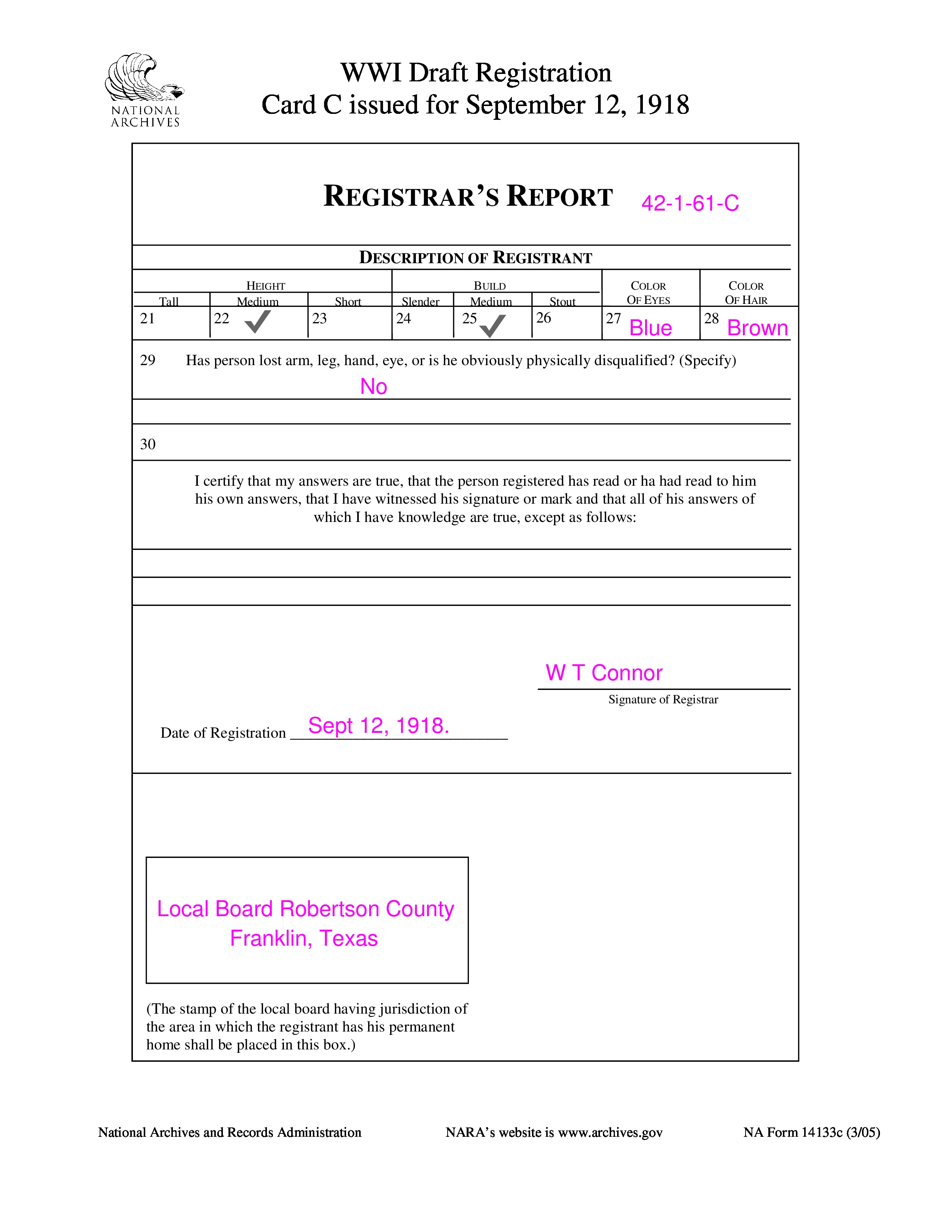 A brief background on W.J. Galloway: According to my mom he was a cotton farmer and census records show he was indeed a farmer. He and his family moved around a lot from farm to farm. Robertson County was another short stay, moving there from Normangee, Madison County sometime after 1916 and moving out of there by 1920 to Scurry County.

Below is a Google Map 3 showing his residences in Texas. 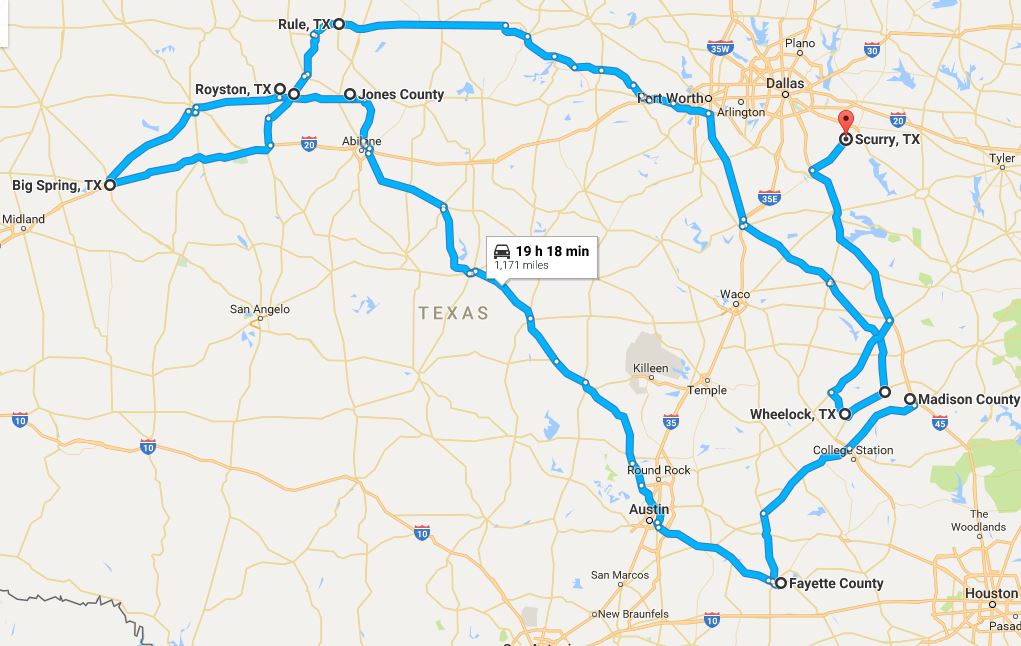 Below is a 1958 map of southern Robertson County and northern Brazos County with arrows showing the location of where Wheelock and Macey are. 4 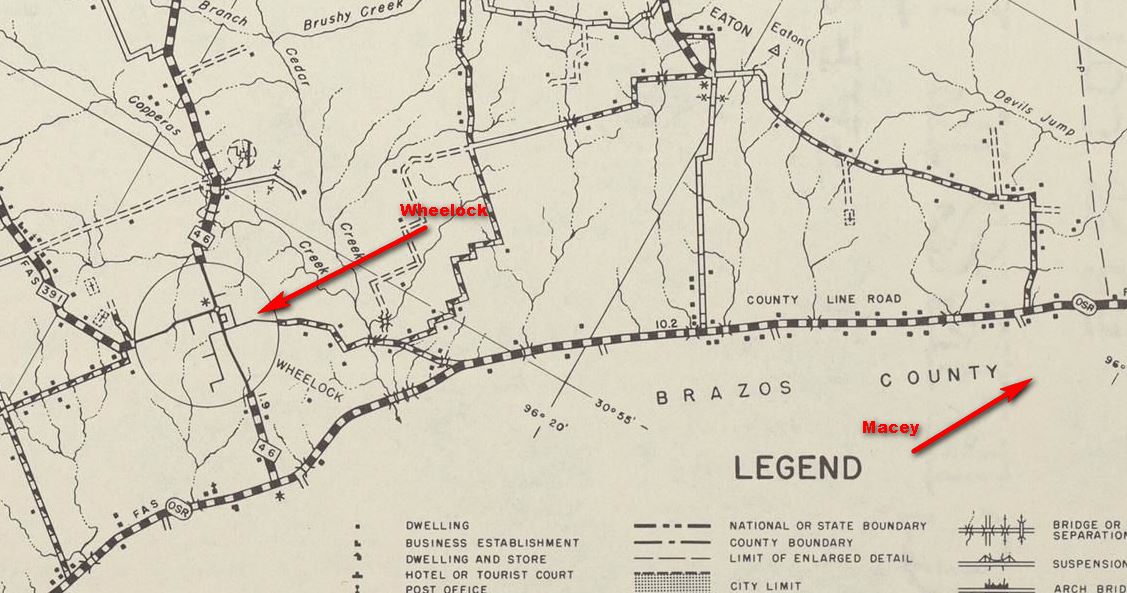 If, according to the birth certificate, they lived “near Macy” and knowing that W.J. traveled to the county seat of Robertson, rather than the county seat of Brazos, leads me to believe he lived just north of the Brazos county line from Macey on a farm.

As you can see in the below satellite photo 5  taken recently, this is a farming community to this day. 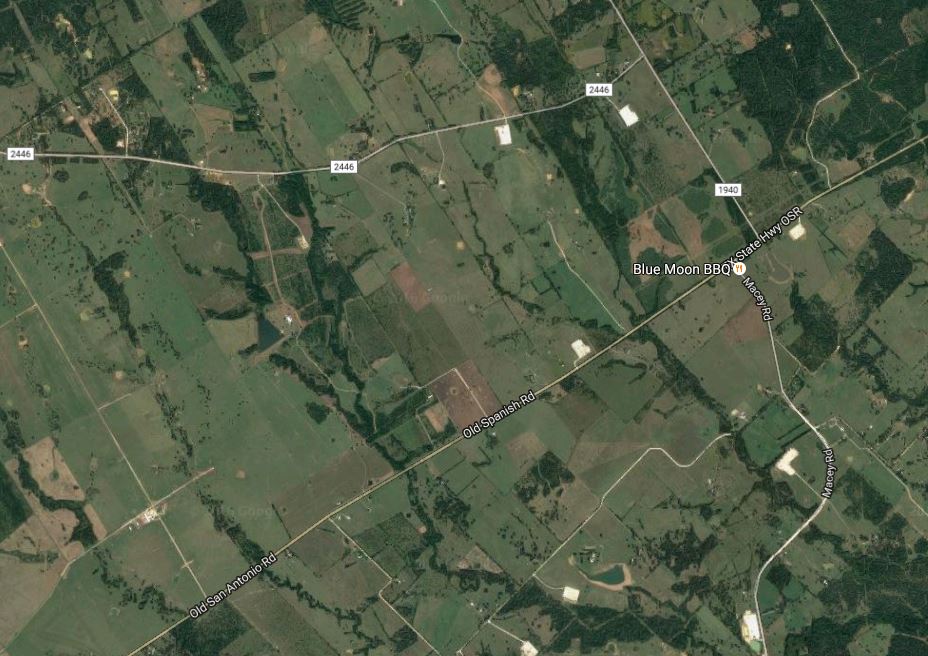 1. Look for records relating to the land he farmed. I have not found any ownership records through his life, so I believe he was a tenant farmer. 6.

2. Look for any City Directories in the area that may have had him listed.

3. Look for histories of Robertson County to see if he is mentioned.

4. Look for any church histories in the area. He was a Primitive Baptist.

We genealogists love specific dates and places. I can’t stand the fact that one of my ancestors was born in just Wilcox County, Alabama… I want to know the name of the town! But, they didn’t all live in towns — they lived on farms in the middle of nowhere!